POLICY ON PREVENTION AND RESOLUTION OF SEXUAL HARASSMENT AT WORKPLACE

This Policy has also been formulated to create and maintain a safe working environment where all employees treat each other with courtesy, dignity and respect irrespective of their gender, race, caste, creed, religion, place of origin, sexual orientation, disability, economic status or position in the hierarchy. Employees in the Company are entitled to work in an environment free from any form of discrimination or conduct which can be considered harassing, coercive, or disruptive.

This Policy extends to all employees of the Company, whether permanent or on contract or any other, and is deemed to be incorporated in the service conditions of all employees and comes into effect immediately.

The purpose of this policy is to foster a respectful workplace through the prevention and prompt resolution of harassment and make Reliance a workplace which figures as a satisfactory place for Employees to have their genuine concerns being looked into by the management via the Internal Complaint Committee formed for this purpose.

We at Reliance are committed towards giving every employee a just and fair hearing on issues encountered by them at the workplace with special attention to sexual harassment. Reliance will take very serious disciplinary action against any victimization of the employee who is complaining or the alleged harasser that may result from a complaint.

This policy applies to all employees of all departments/ divisions and business verticals of  Reliance and its subsidiaries.

This policy applies to all categories of Employees (as defined below) of Reliance, at their workplace or at client sites. The Company will not tolerate sexual harassment, if engaged in by clients or by suppliers or any other business associates.

“Aggrieved Woman” means a woman of any age, in relation to the workplace whether employed or not, who alleges to have been subject to any act of sexual harassment by the respondent.

“Complaint” is meant to construed, defined, understood and interpreted as a formal allegation of Harassment submitted in writing or otherwise by the Aggrieved Woman to the Internal Complaint Committee.

“Conciliation” a process to resolve conflict/complaint by the Internal Complaints Committee on the specific request of the aggrieved employee in the manner provided under the Act.

“Employee” means a person employed at a workplace for any work on regular, temporary, ad hoc or daily wage basis, either directly or through an agent, including a contractor,   with  or, without   the knowledge   of the  principal  employer, whether for remuneration  or not, or working  on a voluntary  basis or otherwise,  whether the terms of employment are express  or implied  and  includes  a co-worker, a contract  worker,’ probationer,  trainee,  apprentice  or called  by any other such name.

“Harassment” is any improper conduct by an individual, that is directed at and offensive to another person or persons in the workplace, and that the individual knew or ought reasonably to have known would cause offence or harm. It comprises any objectionable act, comment or display that demeans, belittles, or causes personal humiliation or embarrassment, and any act of intimidation or threat. It includes harassment within the meaning of the “Protection of Human Rights Act, 1993” and applicable international and united nation’s conventions and treaties. Harassment shall also include Sexual harassment as defined below.

“Internal Complaints Committee” means a committee constituted by the Company as per this Policy.

“Respondent” means a person against whom the Aggrieved Woman has made a complaint in respect of sexual harassment at workplace.

“Rules” shall mean the Sexual Harassment of Women at Workplace (Prevention, Prohibition and Redressal) Rules, 2013

“Sexual Harassment” shall mean and include any one or more of the following unwelcome acts or behaviour (whether directly or by implication) namely:

Sexual harassment also include any of the following:

The ultimate responsibility and authority for applying this policy rests with the directors and his or her authorized representative(s) and Head of Human Resources and finally the board of directors.

b. Complainants, respondents and witnesses

A Committee has been constituted by the Management called the Internal Complaints Committee to consider and redress complaints of Harassment. The Presiding Officer and Members of the Committee are as follows:

(i) One Presiding Officer who shall be a senior level woman employee of the Company;

(ii) Two employee members preferably committed to the cause of women or who have experience in social work or have legal knowledge; and

(iii) One member from amongst Non-Government Organization or Association committed to the cause or a person familiar with the issues relating to sexual.

The objectives of the Internal Complaints Committee are: 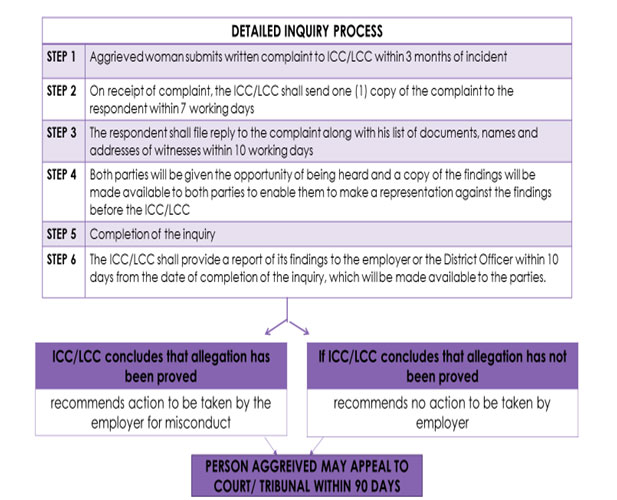 The identity and addresses of the aggrieved employee, respondent and witnesses, any information relating to conciliation and inquiry proceedings, recommendations of the Internal Complaints Committee and action taken against the respondent under this policy shall not be published, communicated or made known to public, press and media in any manner by any person having knowledge of the same.

14. APPEAL AND OTHER RECOURSE

Assaults including sexual assault are covered by the Criminal Code and in such cases if proven guilty the employment will be terminated. Any allegation of such incident must be accompanied by a police complaint.

If a complaint on the same issue is or has been dealt with through another avenue of recourse, the complaint process under this policy will not proceed further and the complaint will be closed and concerned employee must be suspended or immediately terminated.

The Internal Complaints Committee will monitor results in achieving the policy objective and statement.

The ICC shall prepare an annual report which shall have the following details:

Reports of sexual harassment are taken seriously and will be dealt with promptly. The specific action taken in any particular case depends on the nature and gravity of the conduct reported, and may include intervention, mediation, investigation and the initiation of grievance and disciplinary processes.

Where sexual harassment is found to have occurred and proven, the company will act to stop the harassment, prevent its recurrence, discipline those responsible, and/or remedy the effects of the harassment on the individual who reported it and the affected.

Confidentiality will be maintained to the extent reasonably possible, subject to the need to inform other manager, investigator or mediators.

Intentionally providing false information will be treated as in-discipline and may lead to strong action against the employee.

Do not indulge in any of the following behaviour: