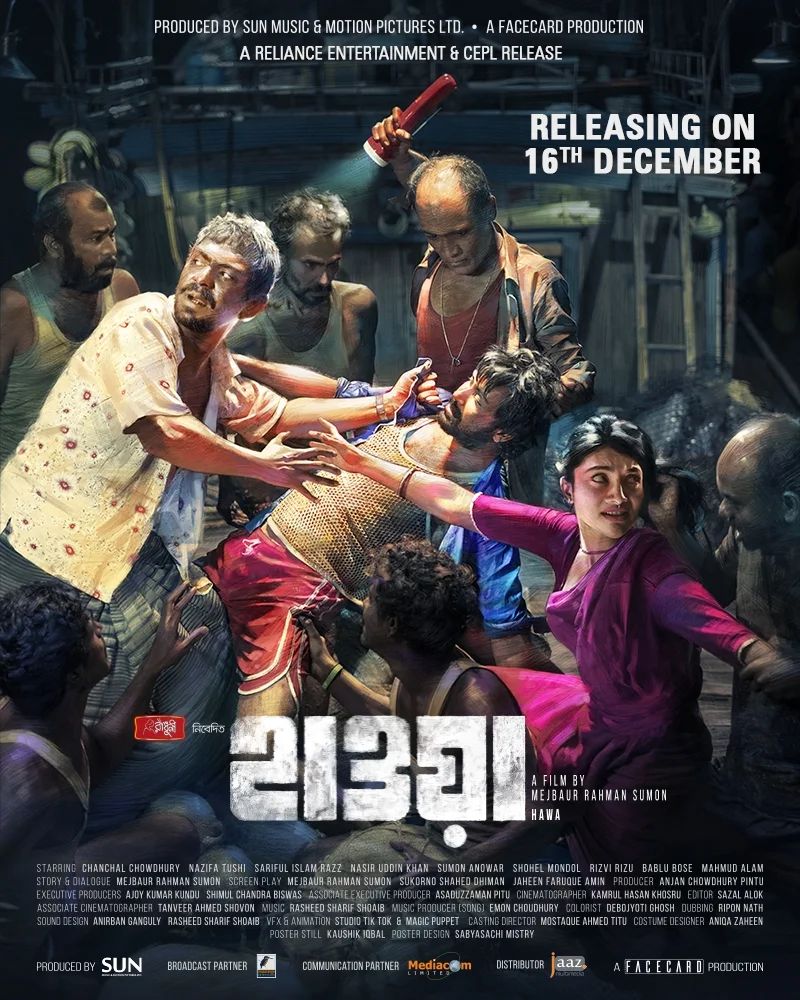 ‘Hawa’ the film which brought a new breeze to the Bangladeshi film industry, is now being
distributed throughout India. The film is directed by Mejbaur Rahman Sumon and will be released on
December 16, 2022 in Kolkata and West Bengal, and December 30, 2022 in the rest of India.

Sun Music and Motion Pictures Limited, the film’s production company, announced that the film will
be distributed across India by Singapore entity Continental Entertainment Private Limited (CEPL) via
Reliance Entertainment.

‘Hawa,’ the myth, fantasy, and mystery-thriller film, received a huge response from the country’s
film fans soon after its release in Bangladesh theatres on July 29, 2022. Even after four months of
release it is still in theatres and raking in business and love.

The film has received widespread critical acclaim and has been shown at numerous cross-border
festivals and diaspora events. This film has been nominated for the ‘Best International Feature Film’
category at the 95th Academy Awards (Oscars), which will be held next year. Following a very
successful run in Singapore under CEPL, the film will now have a wide release in India through
Reliance Entertainment.

In anticipation of this major milestone of ‘Hawa’ in India, Mr. Ajoy Kumar Kundu, Executive
Producer of Sun Music and Motion Pictures Limited expressed his excitement and said, “With
this release, the proud product of some creative people of Bangladesh will be able to reach many
more Bengali speaking people all over the world. We are very happy to be associated with this film.
Bengali films have many audiences in our neighboring country. I think ‘Hawa’ will play a vital role in
increasing the demand for Bangladeshi films here and creating a strong market among them.”

Sreyashii Sengupta, CEO (South-East Asia) of CEPL, which has acquired the distribution rights
for HAWA in several countries including India, said, “The release of ‘Hawa’ in India opens news
gateways for the Bangladesh-India media business. There is already an exchange of ideas on
content and this opens newer paths for collaboration. Language is no more a barrier with a world
keen on content and diverse stories for the big screen experience. HAWA offers that. We see a
robust partner in Reliance Entertainment in India to create a milestone in such a supportive and
wide release.”

Mejbaur Rahman Sumon, Sukorno Shahed Dhiman and Jaheen Faruque Amin have written the
screenplay of ‘Hawa’ with the story and dialogues of Mejbaur Rahman Sumon under the banner of
Facecard Productions. The cast include Chanchal Chowdhury, Nazifa Tushi, Sariful Islam Razz,
Sumon Anowar, Nasir Uddin Khan, Shohel Mondol and others.

Hawa releases in Kolkata and West Bengal on 16th December and across several cities in
India on 30th December in Cinemas with English subtitles.

Reliance Entertainment is one of India’s leading film and entertainment company that is engaged in the
creation and distribution of content across Films, Streaming, TV, Animation, Gaming, and Digital
platforms.

Internationally, Reliance Entertainment has partnered since 2009 with iconic film producer and director,
Steven Spielberg, in the formation of DreamWorks Studios, and thereafter, Amblin Partners.

This relationship has produced several successful which include among others, The Post, 2019 Golden
Globes and Oscar winning film, Green Book & 2020 Academy Award nominee and Golden Globes winner
1917.

Continental Entertainment Pte. Ltd. is a Singapore-based Media & Entertainment company that
specializes in the marketing and distribution of Indian films and television content in Asian markets, as
well as distribution of content other than Indian titles. The organization also engages in cross-border
collaborations both within Southeast Asia and globally.