Mumbai, May 2, 2019: Anil D. Ambani led Reliance Entertainment’s Zapak, India’s leading Gaming Destination, in association with Zhakaas Games, launches the ‘Kaun Banega Pradhan Mantri’ Mobile Game. The game is releasing at an interesting time when the entire country participates in the biggest event on the planet – the 2019 India Elections!

‘Kaun Banega Pradhan Mantri’ encapsulates the thrill of the current Indian political scenario and encompasses the ongoing General Elections 2019. Don’t just witness political campaigns on TV Screen, get into a journey where you literally ‘run’ your own campaign against other political parties. Let the Netas do all the hard work. Take the opportunity to make them run all around the city to gather as much support as they can muster.

“The Election Commission of India does its best to raise the awareness of voting amongst various communities and across demographics by running programs and campaigns to encourage voter turnout. We at Zapak, joined hands with Zhakaas Games, to increase the awareness about how ‘EVERY VOTE MATTERS’, in a style that we know best – making games” said, Amit Khanduja, CEO, Reliance Digital.

Aayush Agarwal, Founder, Zhakaas Games, said “Politics affects every individual at very basic levels, and is one of the most discussed topics across the country. Be it a bus or train journey, local food joints or lavish meeting rooms, people exhibit political enthusiasm in some form and are fans of political figures in our country. The game targets such individuals and clearly showcases how every vote can make a difference through its gameplay. We are excited to be partnering with Zapak, who are leaders in mobile and online gaming in India and understand the pulse of the Indian gamer.”

Becoming a Prime Minister is not easy!

Choose a leader from multiple political avatars in the game, run across the streets and around the city and rush into other people to convert them into your supporters. Each supporter clones the looks of the leader and starts following the leader on their trail. Players can see the number of supporters above the leader’s head.

Each player will come across other competing leaders with their followers backing them up. Avoid the larger parties as they can steal your supporters and take over your party and followers. You can instead take over other smaller parties and add their entire follower base to yours and make your campaign even stronger.

The leader with a maximum number of supporters at the end of a very intense 2 minutes will emerge as the winner. Remember, ‘Every Vote Matters’. You can lose even by the difference of one supporter in the game or be consumed by a leader who is just one follower stronger.

Awareness on the power of the vote and choosing the right leader for our country is the need of the hour. ‘Kaun Banega Pradhan Mantri’ is a moral initiative towards creating that awareness in society. It aims to evoke responsibility among the citizen of India and more importantly among the youth and the kids, who will shape the future of our country.

The game is free to play, available on the Google Play Store and coming soon to the Apple App Store. 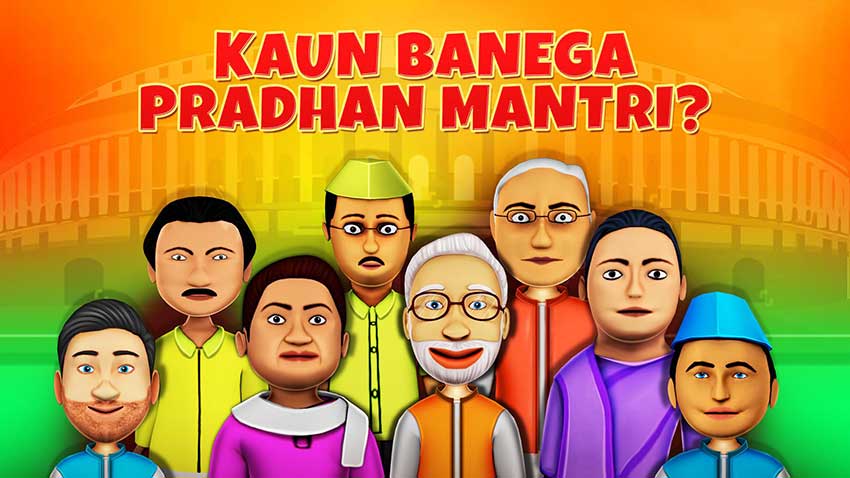 Zapak is India’s leading Gaming Destination with more than 200 Million downloads and 10 million registered users. Zapak works closely with leading Entertainment & Telecom giants such as Universal Studios, Cartoon Network, POGO, Discovery Kids, Airtel, Vodafone, etc to give the next billion users coming online in India and around the world, a fun-filled gaming experience. With over 10 million subscribers, Zapak.com is not only the largest casual gaming sites in the country but amongst the top gaming sites in the world.

Zapak is a division of Reliance Entertainment Digital. To know more, Get Gaming at www.Zapak.com!

Zhakaas Games is an upcoming Game Development studio based out of Ahmedabad, India. Actively engaged in making Mobile Games for Google Play and the Apple Appstore, Zhakaas works closely with leading publishers from all over the world. With 15 games currently live, Zhakaas aims to double that number by the end of this year. Zhakaas is committed to making a positive impact on the Game Developer eco-system in India and is spear-heading this revolution by targeting the next billion gamers coming online across the world.