‘1917’ team picks up the award for OUTSTANDING BRITISH FILM

BEST CINEMATOGRAPHY AWARD for ‘1917’ at BAFTA

The team behind ‘1917’ also wins the awards for SPECIAL VISUAL EFFECTS,

Sam Mendes, who is the first British winner of the Best Director BAFTA since Danny Boyle’s 2009 win for ‘Slumdog Millionaire’ said, “There’s the personal delight in seeing a story very close to me and my family be developed and enlarged but the massive thing has been audiences going in large numbers.”  He added, “None of us knew if an audience would turn up, it wasn’t certain at all. It’s coincided with awards season and the fact this is still number one in the UK after four weeks, [the awards have] really alerted people to the fact the movie is on, it rarely happens like that.”

Inspired by the stories that Oscar-winning director Sam Mendes’ grandfather told him,  1917 has had a dream run this awards season with 10 Oscar nominations, including  ‘Best Picture’ and ‘Best Director,’ for the forthcoming  92nd Academy Awards, which is scheduled to be held at 9th February 2020 in Los Angeles.

1917has previously won three awards at the Critics’ Choice Awards 2020 for ‘Best Director’, ‘Best Cinematographer’ and ‘Best Editing’. The film also won accolades at the 77th Golden Globes, with an award for Best Picture in the Drama category, and the Best Director’s award for Sam Mendes. 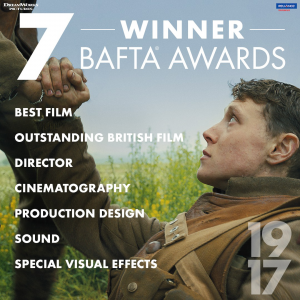